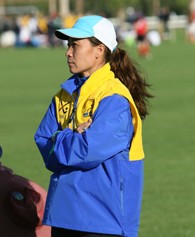 Jun was a player on the Chinese National Team for 8 years and captained the Jaing Xi Provincial Team to 3 National Championships. As a 12 year old, Jun was selected to train in the residence program at the Jiang Xi Sports Training Center where she developed into a fast and skillful midfield player. As a 16 year old, she was selected to play for the Chinese Under 21 National Team before making her debut for the senior team at age 18.

Jun graduated from the Shanghai Sports University and returned to the Jaing Xi Training Center as a sports administrator and coach. When injury curtailed her playing career, she took up umpiring and again quickly rose to the top, achieving International Grade 1 level where she has officiated in three Asian Games, The European Cup, The Pan Am Games, The Junior World Cup, three Olympic Qualifying Tournaments and the World Cup. In 2004, Jun received the Golden Whistle from the International Hockey Federation to mark her 100th International match.

Before coming to the United States in 1999, Jun was the coach of the Chinese Under 21 National Team. Jun now coaches in the USFHA Futures Program in addition to her duties as Director of World Class Coaching Field Hockey Program and Head Coach of the WC Eagles. 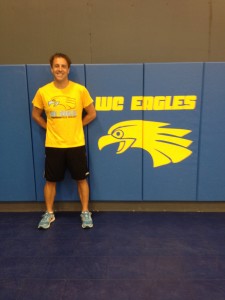 Guy played a number of years on the Scotland Under 21 team and was part of the Scotland Men’s Squad before injury ended his playing career.

He quickly transitioned into coaching, serving as head coach for his Alma Mater Heriott Watt University from 1998-2001. A brief stint coaching Dundee University was followed by a return to the club team of his youth where he assumed the role of head coach of the Women’s Team and the entire Youth Section.

Guy moved to the US in 2007, joining Syracuse University as an assistant coach and helped them rise from 35th in the country to a #1 ranking, a Big East Championship and a Final 4 appearance in a little over a year. Two more Big East Championships, two Elite 8 appearances and two top 8 rankings followed before Guy moved to The University of North Carolina. In three seasons at UNC, Guy helped win two ACC Championships, reach three Final 4s (including two championship game appearances) and rank in the top 3 in the country every year. As Director of Player Development at Syracuse and UNC, Guy coached twenty players who were named All Americans (including ten 1st team).

Guy has also coached extensively in the USA Field Hockey system, assisting with Pennsylvania, New Jersey and South High Performance Squads, heading up Mid Atlantic High Performance in 2013 and working as a Head Coach in both Junior High Performance and Futures Elite Championships. Guy has coached several USAFH Junior National Camps, assisting with Under 17, Under 19 and Under 21 US Squads. In September 2013, Guy was named assistant coach for the US Women’s National Team who competed at the Pan-American Cup in Mendoza, Argentina, qualifying for the 2014 World Cup. 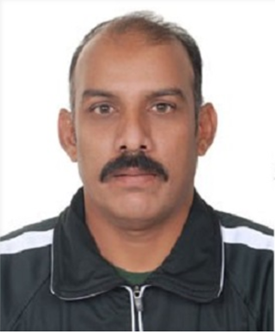 We are pleased to have Shahid, an outstanding international goalkeeping coach, as a full time member of our coaching staff.
Shahid was one of the world’s finest goalkeepers, winning Olympic Gold (1984) and Bronze (1992) medals, World Cup Gold (1982) and Silver (1990) medals, and two Asian Games Gold medal, during his playing career which spanned 10 years and135 International Matches. 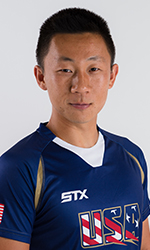 JaJa is a member of both the USA Men’s Outdoor and Indoor Squads. He earned his first senior Indoor cap at the age of 16 in the Test Series against Canada and was a member of the historic USA Men’s Indoor National Team which beat Argentina, in Argentina, to win the Gold medal at the 2008 Pan Am Indoor Cup. This was the first time that a USA Men’s Team had beaten Argentina, either indoors or out! JaJa also won Silver medals at the 2010 and 2014 Pan Am Indoor Cups.

Having been selected to the USA Under 16 and Under 18 Teams, JaJa played for the USA Under 21 Team on tours to New Zealand, Chile, and Canada, prior to playing in the Pan Am Under 21 Championships in Mexico in 2012.
In 2017 JaJa was selected to the USA Men’s National Team. Later that year he was part of the USA Men’s Bronze Medal winning team at the Pan Am Cup. He has played 24 International matches on tours to Europe, South Korea, and Central American and won Gold and Silver medals at tournaments in Mexico and Spain.

A full time member of our coaching staff, JaJa was also a member of the Wyoming Seminary 2008 undefeated Pennsylvania State Championship Team while in High School. 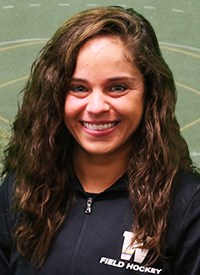 A WC Eagles alumnae, Melissa is Head Coach at Widener University, following serving for four years as their Assistant Coach. Melissa graduated from Hofstra University where she received the Female Academic-Athlete of the Year Award and was also named an NFHCA Scholar Athlete in her Senior Year.

Katie won 64 caps with the USA Women’s National Team following her graduation from the University of Delaware. She also played for the USA Under 21 Team in the FIH Junior World Cup in Chile.

Katie gained valuable playing and coaching experience in both Ireland and England. She is also currently the Head Coach at Villa Maria Academy.