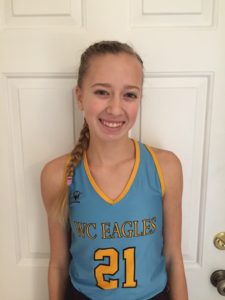 2016: Most Assist and tied for most goals on Varsity (as a sophomore)

Piano: Gold medalist at Golden Key Festival 2011. Silver Medalist 2010, 2009. All 3 years performed solo at Carnegie Hall in NYC. Clubs: Paws for a Cause and Hands to Hearts

Kinzie Thompson excels in classroom, community and on the athletic field